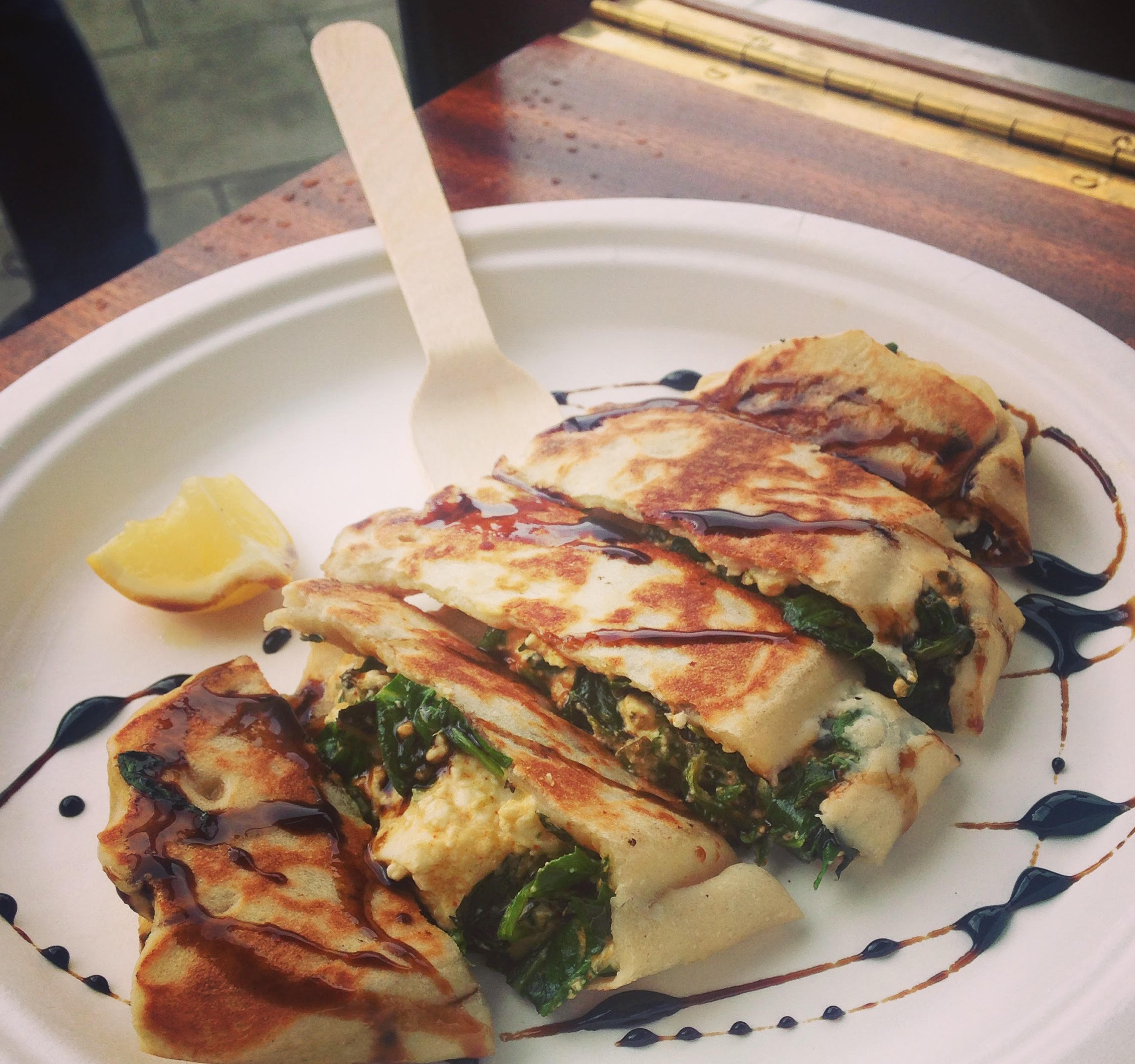 It was a pit-stop on his way back from a Turkish music festival, which would dramatically turn street food entrepreneur Kerry Burns’ passion into his career.

Kerry said, “My moment of discovery happened in the city of Kütahya on the Anatolian plateau in central-western Turkey. I was driving home to the UK from a music festival on the south coast with several friends and we stopped to look at ceramics in this city. Quickly bored with pots and plates, I found my way to a street food stall making Gözleme. That moment hasn’t left my memory since”.

Gözleme comes from the word göz meaning pocket or compartment in Turkish, and relates to the way the dough is folded round the filling before cooking, traditionally done on a Saj or Saç which is a domed oven.

When he returned home, solar industry entrepreneur Kerry started The Wheel Food Company. “I love good food, cycling and being able to chat to the public, so have taken the leap away from financial security in the solar industry, to my new and unknown world of street food trading from a Dutch cargo cycle.

“I started wanting to sell soup and sorbet – two things I personally love – but I always had plans to develop the offerings to include other food items I have seen and enjoyed elsewhere. It took less than 2 weeks of trading sorbet in an ice-cream-filled market to press fast forward on my development plans”.

Having travelled a number of times in Turkey, Kerry was struck by the variety of excellent street food stalls. “It made me wonder why it was that across the world, Turkish fast food seems to equal kebabs and not much more”.

“There are dozens of delicious fast foods and one needs to spend just an hour or two wandering near Eminonou in Istanbul to see some of the richness on offer”.

“The dough recipe I follow for Gözleme is fairly traditional and includes live yoghurt, which gives the unique and delicious consistency. Most Turkish homes and families appear to have their own very slightly different recipes, all of which are better than all others!”

If you want to make something approximating a traditional Gözleme at home, try this basic recipe, which makes enough for 8 or 10 Gözleme:

Method:
1.         Mix all the ingredients together well and leave to sit for 10 minutes.
2.         After 10 minutes, knead well with hands covered in vegetable oil to prevent the mix sticking.
3.         Cover and leave somewhere warm to prove for 40 minutes to an hour – depends on temperature.
4.         Whilst waiting for the mix to prove, make your filling. A simple but delicious filing is 200g of feta cheese, mixed by hand with a good handful of chopped fresh mint, a teaspoon of chilli powder and 250g of roughly chopped spinach
5.         The dough mix should have risen to nearly twice its original size by now. Dividing into 8 or 10 portions, roll each one on a well-floured surface until thin and rectangular at around 8 x 6 inches  – you could aim for cardboard rather than paper thin.
6.         When rolled, fill with a handful of the mix spread evenly across the surface.
7.         Quickly fold over, seal the edges with your fingers and pop straight into a hot dry non-stick griddle pan, or a large frying pan will do just as well.
8.         Cook on each side until the surface is browning nicely, then serve sliced with a lemon wedge and a side salad.

In Turkey Gözleme are stuffed with all sorts of fillings, from minced lamb to white cheese with parsley. I like to think mine are more Turk-ish than truly Turkish as they include vegetarian feta from the Artisan Cheese Company in Bath, alongside spinach, mint & chilli and are served with pomegranate molasses. I’m also making them now with chorizo, halloumi and rocket with a piquant drizzle of Ginger Beard’s Preserves Moor Amor Chipotle Ketchup, so while I’ve departed from tradition, they’re still a delicious fast food that’s cooked freshly to order.

You can find Kerry and The Wheel Food Company at the food markets on Wine Street every Wednesday and Friday 10-4pm, as well as at the Harbourside Market at Broad Quay on Saturdays and Sundays 11-5pm