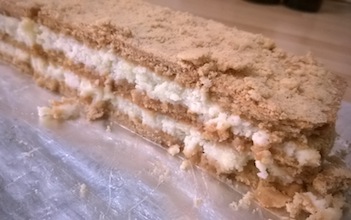 Olesea moved to Bristol from the Eastern European country of Moldova two years ago. Earlier this year she gave birth to a bouncy baby boy called Jacob! Jacob and his mummy are getting to know the other mums in their area, so keen baker Olesea brought this traditional Moldovan cheesecake to her new group. She said “they really liked it!”

This recipe is great for people on the go (including new mums!) as it’s very simple and and doesn’t require baking.

1. Add the sugar to the cheese.
2. Add the butter and mix well.
3. Heat the milk until warm, (just warmer than baby milk)
4. Dip a biscuit into the milk for one second and place on the base of the tin. Repeat with more biscuits until you’ve formed a complete base layer.

Memories from the Seychelles