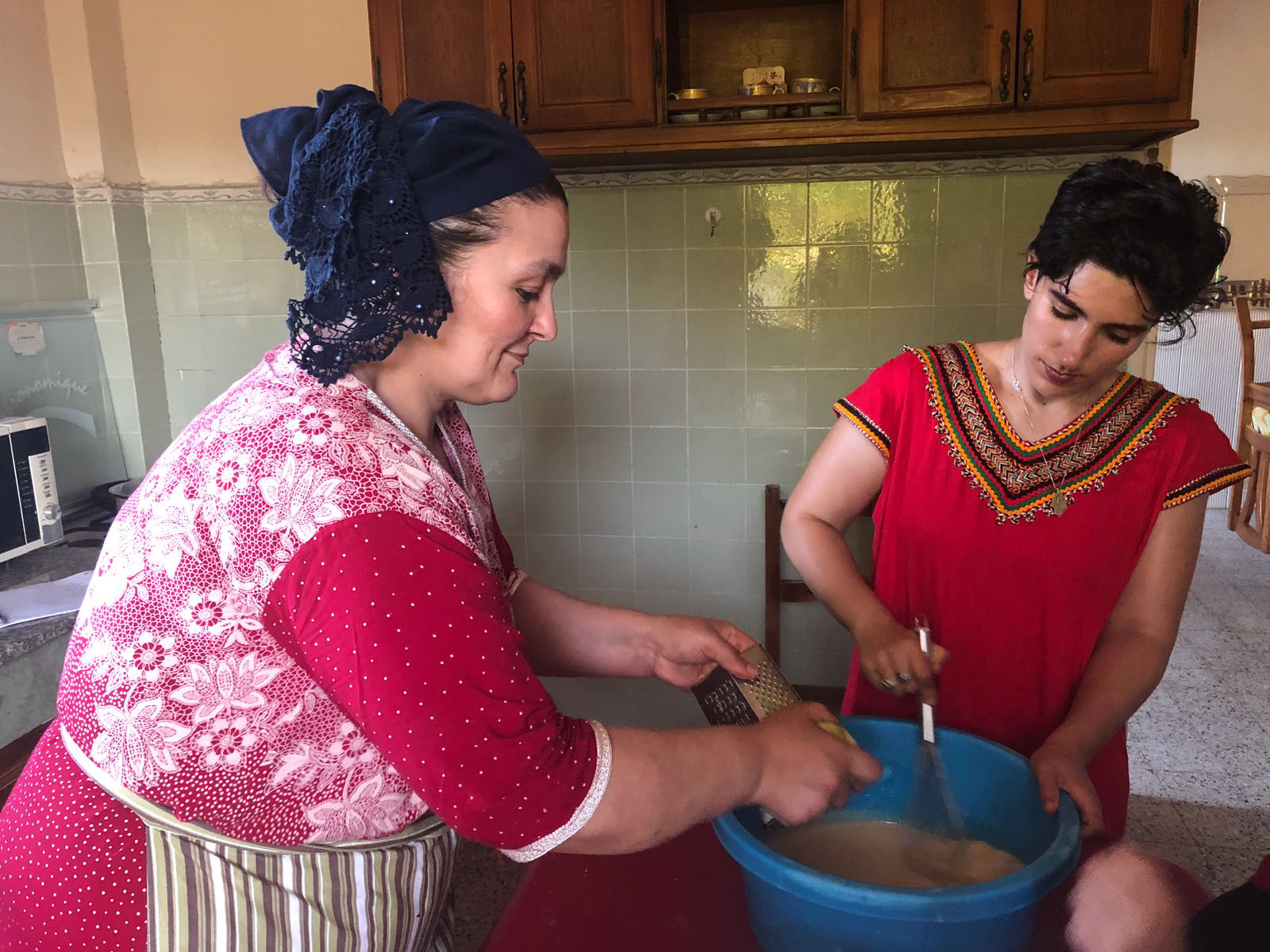 After catching up with 91 Ways volunteer and friend Leila Gamaz in the summer to find out how she got involved with 91 Ways, we were eager to learn more about her Algerian-English heritage and her families recipes. We asked if she would tell us more, and luckily she agreed!

Below, Leila has shared with us how she explored both sides of her heritage and the ways they have combined to create a truly unique family history, as well as forming new twists on some classic recipes. She was also kind enough to let us  in on a couple of delicious family recipes, which can be found at the bottom of the post and we can’t wait to try ourselves.

To find out more about Leila and her work, including other writing, you can check out her website here.

“When I left home, my English grandmother gave me a school textbook full of her handwritten recipes. Fruit cobblers, rock buns, cheese and beetroot tart. What I enjoy most about it are her notes scrawled between the recipes; ‘Draw lines and sticky up bits on your potato pies!’, or for shortcrust pastry; ‘Develop your own trademark decor’.

As Algeria had a civil war until 2002, gathering recipes from this side of the family has come later in my life. Chorba Frik, flame charred aubergines, fig jam; these are recipes that have never been written down before – up until my grandmother’s generation all of the family were illiterate. Despite this, recipes have continued to be passed down over many days and nights huddled around simmering pots.

Gathered in a nook of my aunts’ kitchen, the first recipe I learnt was Chakchouka Algérienne. We charred peppers on an open flame with one hand and stirred a pot of caramelising onions with the other. I wanted to capture the recipes for posterity but initially found myself observing as though watching a performance, making few notes. When adding seasoning, they count as their sprinkling fingers make a turn of the pot; 3 turns of salt, 2 turns of pepper. They place an index finger some way between their wrist and forearm to indicate the amount of ginger or the length of an aubergine. When the spice mix Ras El Hanout (“head of the shop”) is unravelled from a sealed bag, fingers are pinched and put to pursed lips. Regions, and sometimes families, have their own recipes for this mix used across North Africa, containing up to 80 different spices.

I also began to notice that there were ways in which my English and Algerian sides have influenced one another’s cooking. One of my Algerian aunties makes a version of an English pasty filled with a sweet and spicy tomato sauce, which she calls a soufflé. She also makes pizzas out of a thin semolina dough rolled out on low tables. My English Grandmother likes to impress guests with her take on Cous Cous Algérien, but with seasonal English vegetables.

When I came back to England with a notebook of recipes, I felt a disconnect. I needed to cook them myself and make them my own. I started with Bademjan, a dish where aubergine is at its best; gooey and soft, disappearing into a sauce of its own making. I made Amina’s so-called magic paste; a deeply sweet blend of roasted red peppers, roasted tomatoes and tomato puree. However, in the finish I was craving tartness. I discovered that the Iranian version of the recipe contains pomegranate molasses, one of my favourite ingredients, so I added this.

I now have a growing collection of my Algerian family recipes. Each time I make one, I discover new parts of myself and my family history. Recipes provide you with the script, but cooking the meal tells the story.”

Make up a savoury pastry with 4oz (115kg) fat and 8oz (225kg) flour, plus 1tsp mustard powder and black pepper

This is quite a large quantity, but meals are always made as though preparing for some sort of celebration in Algeria!

Palestinian Mezze Evening: Join us for the first Supper Club of 2020!