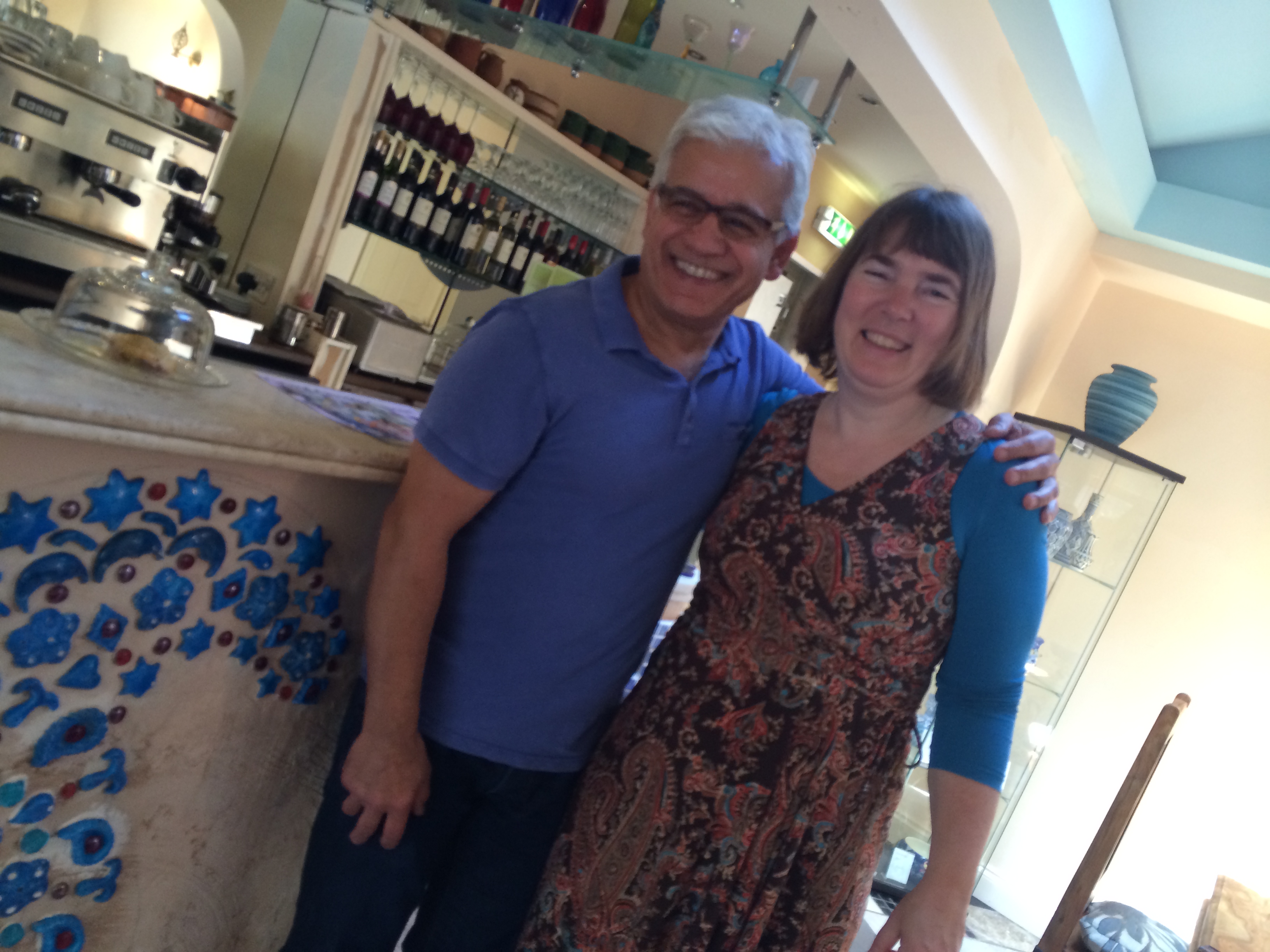 “When my family spoke of life during the war, they spoke, not of the shortage of food for my grandparents, but the sharing of what they had – my grandmother always managed to send a little something across the balcony for the neighbours, because she knew there was a Jewish family in hiding – taking that risk to share food when you have two young babies to look after must have been a big thing.

For Christien, her family’s strong tradition of sharing food has stayed with her, from growing up in the small university town of Wageningen in the Netherlands, to running her restaurant in Bristol.

“Food in my childhood house was simple but welcoming – sharing was as important as making people feel comfortable – if someone announced they were vegetarian, we’d just go and boil them an egg!”

“I met my partner Moh three years ago and it was his sharing and caring nature which brought us together – the similarities in our values around food”.

Moh’s is a story of conflict, and community, a story of looking out for each other and learning through necessity.

“I grew up in the Iranian city of Ahvaz which is near the Iraq border. So when the Iran-Iraq war began, we were very close to the line of fire and the women and children were evacuated from their homes”.

Remembering his teenage days, Moh continues his story “many homes were empty, but some men stayed behind to protect their houses and we needed to eat! We asked, “who can cook?” I love cooking and Iranian men love food, so I ended up cooking for our community, with whatever we could find in those days of war.”

A few months later Moh left for Germany and found a job in the food industry. He started doing maintenance jobs, and soon worked his way up, first in an Italian restaurant, then in a Persian eatery where his boss taught him everything he knows.

Christien says, “it was this man who gave Moh his passion for Persian food – he has a special talent for combining flavours.”

When Moh came to England, his dream was to introduce his passion for Persian flavours to the city. Wondering if the people of Bristol were ready, Moh decided to start small: every Friday he would text a group of friends what he was cooking and those who were interested would reply and come and collect what he had made – like a home takeaway.

Soon that list grew to 200 people – and one of them was Christien.

She continues the story: “that was how Moh and I met! A friend of mine ordered from him when I came to her house for dinner one night. I liked it so much I put myself on his list to be texted every Friday.

One night I ordered Ghorme Sabzi (which means green herbs). It’s cooked with a dried lime to give it flavour – dried limes are really intense and you’re not supposed to eat it – but I did, and when I did I had to text him back and ask him what it was I’d just eaten – it was 1230am at night!”

As Moh and Christien’s relationship blossomed, their love for sharing food, and Moh’s successful texting business led them to set up a Persian restaurant. Kookoo was opened on Gloucester Road, and a year later Kookootoo on Filton Avenue welcomes everyone – whether they’re eager to try new flavours, want a taste of home or are meeting for coffee and a chat.

Try Christien’s – and Iran’s – favourite Iranian dish (be sure to fish out the dried lime before serving!)

Nicknamed one of the world’s comfort foods, it’s served in every Iranian household at least once a week.

This dish is quite stunning. If you have made it correctly it should be a rich green in colour and the aroma out of this world.

1 shoulder of lamb, trimmed and cut into 3cm chunks.

8-9 dried limes, washed and pricked in several places (can buy from Stapleton road)

Let the stew bubble away for a couple of hours if you can. The finished dish should have a rich, green sauce and the meat should be falling of the bone.

Serve with plain white basmati rice and wedges of onion, raw garlic and a pot of thick, plain yogurt.

Memories from the Seychelles

Holi, a feast of colour and togetherness