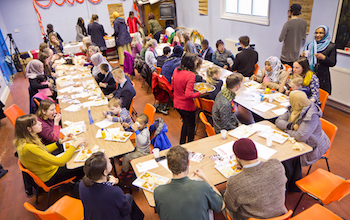 In January we linked with the Hindu Temple in St George to host a meal for our local communities. Over 25 languages were represented and new friendships were formed over a delicious chickpea curry.

Former chef and restaurant owner Shiv Sama is a member of the Temple and this is his story and recipe:
Originally from India, Shiv came to Bristol from Northern Ireland with his wife Saroj four years ago, but never imagined that he would work in catering, “I became a chef at 35, but I never thought I’d become one! Until that point, I was in the clothing business.

I’ve always been curious about cooking – I didn’t have to cook, but I wanted to learn, so when I left home I could cook a few dishes that my mother taught me.

When I was in my mid thirties a friend told me they wanted to open a restaurant. I said I’d help with the money but I didn’t want anything to do with it as I don’t have time”.

Shiv said, “then someone asked me, why don’t you open an Indian Restaurant and I said, “don’t talk rubbish!”

But then Shiv agreed to invest in it, and soon he owned a restaurant. Shiv remembers those early days:

“I employed a chef but he wasn’t doing very well so he left and I started cooking myself. That was a nightmare!

Then I found a chef from India who had been working in a five-star hotel back home, and it was him who taught me everything…..I dived into the deep end and the rest is history!”

just because it went wrong, you have to try again. I eventually had 3 restaurants”.

Shiv remembers “I loved most of the dishes, I like meat, fish, vegetables, lentils, Okra is beautiful the way I make it”.

Shiv supports the work of 91 Ways to unite Bristol’s 91 language communities together “Bristol has all of these wonderful languages and communities but people don’t always connect, get opportunities to meet and understand each other.

Food is a great way to learn about each other, break down barriers and understand each other.

There aren’t many opportunities in Bristol to meet to these communities, so we’re reaching out and saying to them “come and talk…..you really are part of our city!”