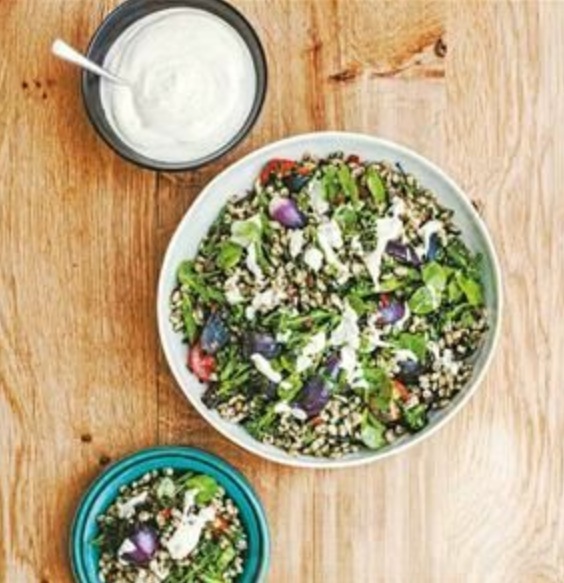 Named as one of the ‘Rising Stars of 2014’ by The Observer newspaper, Sabrina Ghayour is a self-taught cook and food writer who hosts the hugely popular ‘Sabrina’s Kitchen’ supper club in various venues across London, renowned for Persian and Middle Eastern flavourful dishes. This dish is from her book “Persiana – recipes from the Middle East and beyond”. Za’atar offers a fantastic way to liven up a humble grain such as barley, and adding a few vegetables makes a real meal of it. Not only is this dish healthy and a colourful treat for the eyes but it bursts with flavour, too.

1. Preheat the oven to 160° °C/fan 140°C/gas mark 3. Line a large baking sheet with nonstick baking paper. Place the tomatoes cut-side up on the prepared baking sheet and roast for about 1 hour, or until partially dehydrated but not burnt. Remove from the oven and allow to cool.

2. Increase the oven temperature to 200°C/fan 180°C/ gas mark 6. Place the chopped onions in a baking dish, season with salt and pepper and roast for about 35–45 minutes, or until browned and slightly charred around the edges. Set aside and allow to cool.

3. Preheat a griddle pan or a heavy-based saucepan over a high heat until very hot. Put in the broccoli and season with salt and pepper. Blacken the broccoli stems in the pan – you don’t need to cook them through, you just want them to take on a charred flavour, so ensure they stay crisp; this should take 3 minutes or so on each side. Set aside to cool.

4. Boil the barley as per the packet instructions, then rinse well in cold water, drain and put it into a very large mixing bowl. Dress it with half the lemon juice, salt, pepper and the za’atar. Add the roasted cherry tomatoes and red onions and mix well.

5. Chop each broccoli stem into 2–3 pieces, incorporate into the salad and taste to see if more seasoning is needed. Add the chopped parsley, chilli and pea shoots and mix again.

6. To make the yogurt dressing, add the olive oil to the yogurt along with the remaining lemon juice, the ground coriander and a generous seasoning of salt and pepper.

7. Place the salad on a large flat plate, arranging the vegetables nicely around the plate. Finally, drizzle the yogurt sauce all over the salad and serve.

To order za’atar and olive oil from Zaytoun, go to www.zaytoun.org

Split pea soup with dumplings – a recipe from Belize