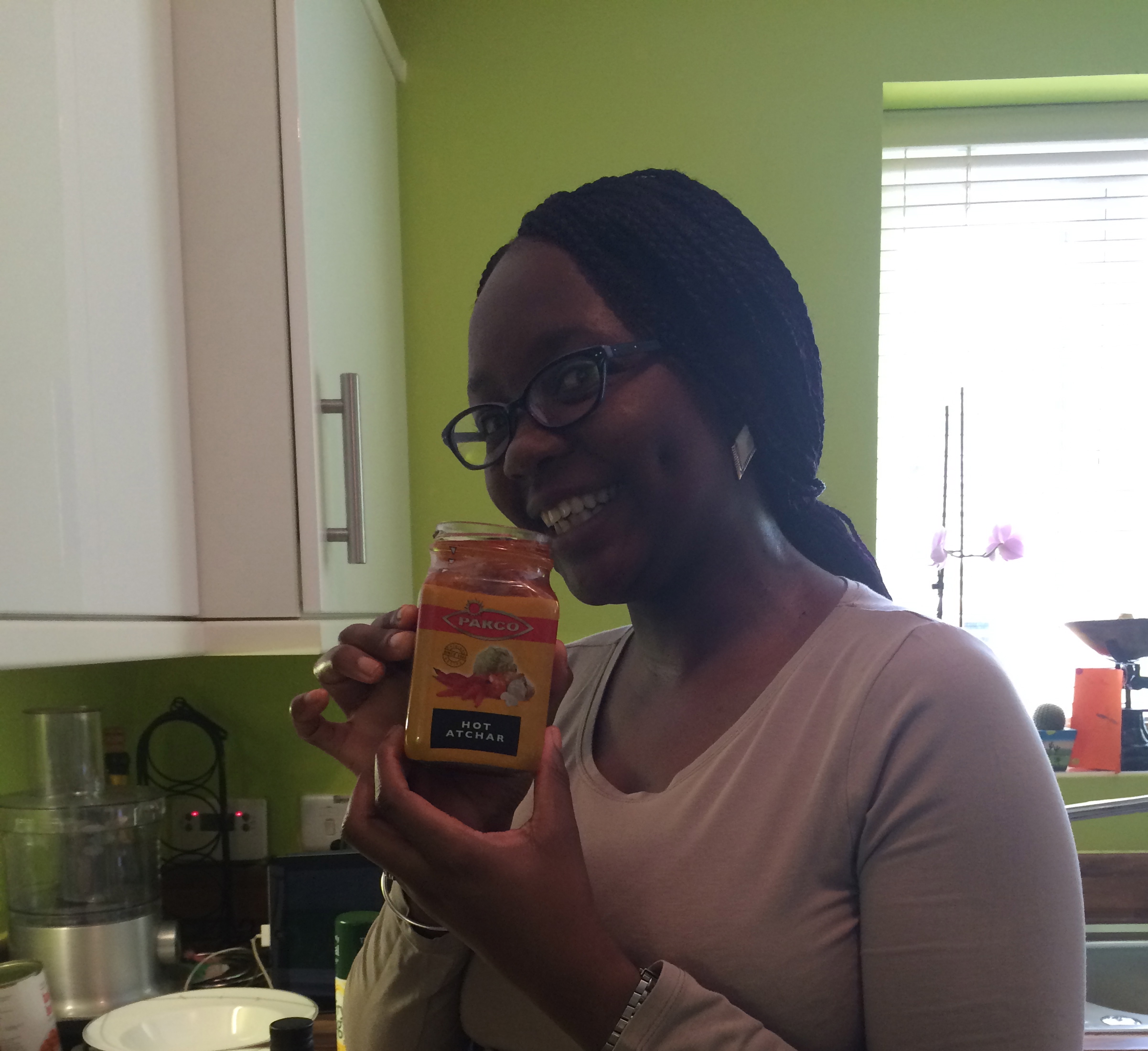 Tinyiko’s story is of a food heritage forged out of history, migration and inequality “we would always have a Braai (South African BBQ) on a weekend, with friends, family, everyone”.

“A South African braai isn’t like a British BBQ with sausages and burgers: we’d have all sorts of meat – and Chakalaka and Pap….you can miss out any other dish in a braai, but not Chakalaka!”

Chakalaka is a South African vegetable relish – usually spicy and sometimes fiery! Tinyiko, who moved to Bristol from South Africa six years ago says, “it’s like a pickle – my husband Mark and my six year old daughter Nsuku love it! The typically Indian spice ingredient comes from the late 19th century when people from India were brought to South Africa to work in the sugar fields”.

Pap is a traditional stiff porridge made from ground Maize meal.
When the pap is cooked, you beat it against the side of the pan to soften and shape it before serving “”if you’re going to a South African house, if you hear a sound like this, you know what they’re cooking inside. Oh gosh I just want to cook some pap and have a braai right now!”

Here we eat pap at a braai, but it’s used as an accompaniment for most South African dishes, including stews. A typical South African stew will include cuts of meat such as oxtail and chicken feet. These cuts became a part of our diet several generations ago because our great grandparents were paid not in money, but in meat such as chicken feet and everything their white employers didn’t eat”.

Here is Tinyiko’s recipe for Chakalaka – a simple to make, but incredibly tasty dish. The use of Atchar (a spicy vegetable pickle) is optional, but can be found in a lovely South African shop in St Nicholas Market

1/2 of green red and yellow peppers

Half a jar of vegetable Atchar (or as much as you dare!)

Sauté the onions in the chilli oil

Add the peppers, beans, spices and fry for 5 minutes

Slowly add the carrots and beans and simmer for five minutes.

Add the Atchar, simmer until heated through and serve.

Serve a couple of tablespoons per person

Mix a cup of maize meal with cold water to make a paste.
Add enough hot water to make a soft porridge and stir slowly to keep it smooth until bubbling. Cook for 10-15 mins

Before serving, beat against the pan to smoothen and serve in layered spoon shapes, in the authentic South African way.

Rissa’s story: food and identity are central to preserving a tradition which shapes who we are