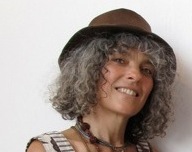 I’m an artist and I trained as a therapist, but I soon realised that what I was doing was just filling a gap. So I began to ask the question, “ what is the source of people’s discontent and dis-ease?” people are hungry for a different way of being….and food connects us to eachother. It’s like a safety net: food can be used as a way of sharing something deep about yourself”.

“People don’t understand where food comes from any more: kitchens are no longer built in schools, new-build homes are now so small that, in some kitchens, there is only room for a microwave”.

Miche’s answer to the problem? “We need to go back to our roots: I explore the relationship between food and art – putting the culture back into agriculture: exploring the ancient food rituals which are a part of our heritage”.

“If you pay attention to what’s going on around you and understand what it is to actually live in the present moment, it’s about living an authentic life: bringing the sacred into every day. Food connects us to nature”.

When Miche talks about her childhood, it’s easy to see how the connection between food and the sacred runs so deeply for her as she grew up around the indigenous rites of passage and the feasting ceremonies of the local African communities: “I was born in rural Zimbabwae which, back then, was called Rhodesia.

It was a time when black people and white people were polarized: there was a big divide between the black workers and their white employers, but my mother fought passionately for liberation for the black community”.

“I remember one day – I was between five and six years old – I walked to the workers’ house. A woman there gave me an egg, straight from a chicken. I suddenly felt amazing – the egg was still warm in my hands! It had been given to me, a present – it was an exquisite miracle to me. I remember running so fast, running down the hill to show my mother”.

Miche concludes, “this is where the foundations were laid for my ritual “sacred mayonnaise”: a dish i which i created for Soil Saturdays as part of Soil Culture at Bristol’s Create Centre.

This is the simple art of making mayonnaise by hand using four ingredients: one egg; sea or rock salt; lemon and olive oil. where possible, all ingredients are organic for the health of the planet and our bodies.

the vessels and implements needed are: three bowls, a small wooden spoon and small bottle or jug of olive oil.

Serve as it is, or alongside accompany fish or vegetables, or as part of a dressing for a salad.

Perogies and the passage of time: Anika’s Story