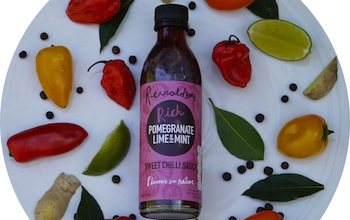 Method:
Preheat the grill to medium-high.

Run a small, sharp knife round the top of the aubergine, 1cm/½in or so below the stalk and only just cutting through the skin; then make four evenly spaced, similarly shallow cuts, along the length of the aubergine right down to the end. Then cover the aubergines in a little olive oil and thyme.

Grill the aubergines for about 24 minutes, turning every 5 minutes or so, until evenly cooked with charred skin, and until the aubergine feels soft, but not too mushy. Transfer to a plate of your choice.

Peel away the aubergine skin in four long, narrow sheets using a small knife. Without cutting right through the stalk end, cut the aubergines in half lengthways and gently prise apart until you have two horizontal halves remaining attached at the top end (see picture).

Mix the garlic parsley, mint with the olive oil until well combined and spoon the mixture over the aubergine. Season lightly with salt (not too much – the cheese is salty anyway) and pepper, and crumble the feta cheese over the top.

Ellis recommends that you serve it warm, with a squeeze of lemon, alongside Rennoldson’s pomegranate, lime and mint sweet chilli sauce!

Bublanina pudding – a recipe from the Czech republic