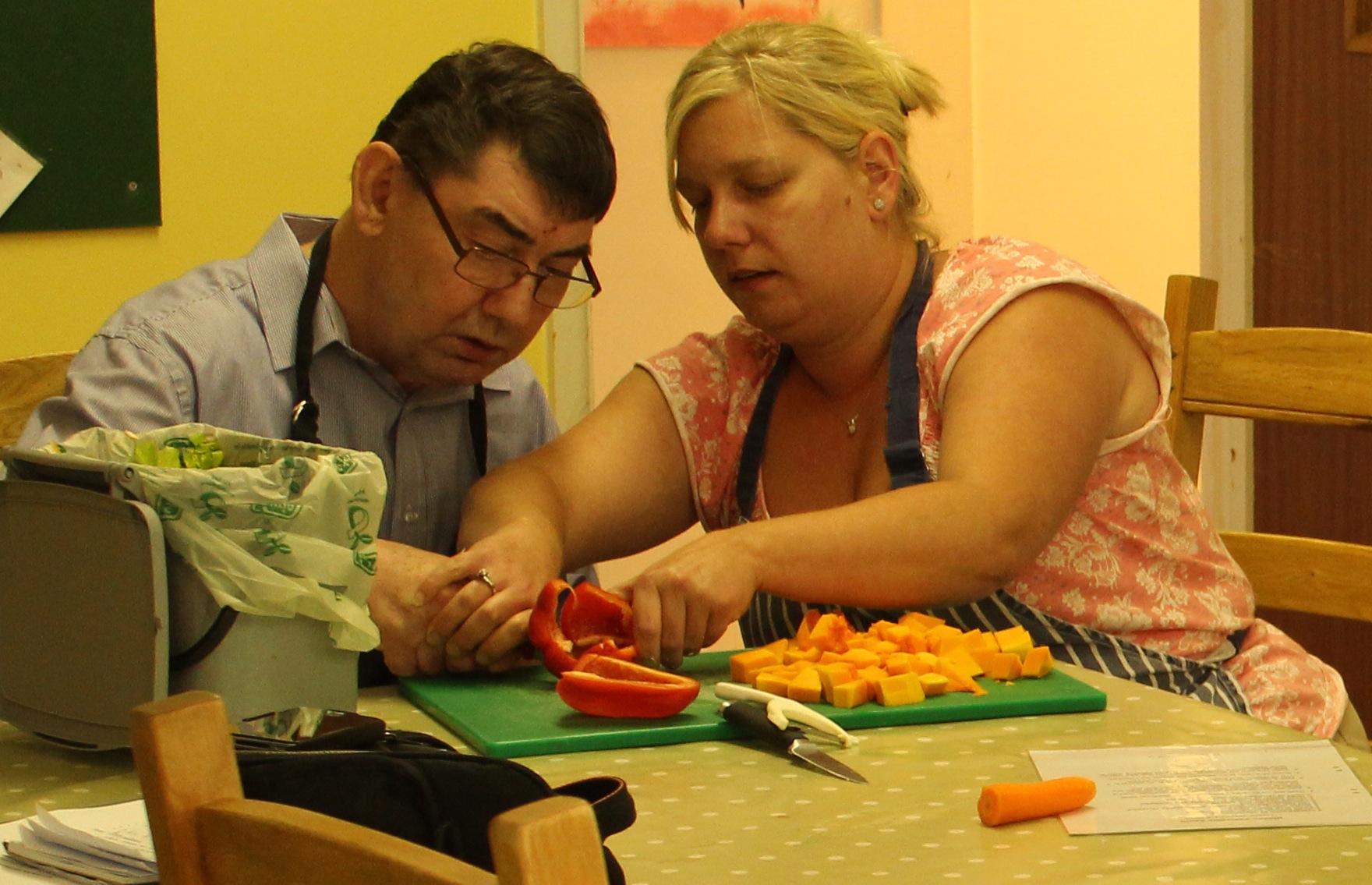 “When I first came here that front garden that goes on to the road was full of very, very high trees. There was just no communication with the local community, there was just a wall of green and the garden was completely wild, so I said ‘what do you want to do with it?’”

From the outside, the first things you see walking past are the raised vegetable beds in the front garden. Walking through, there are beds of parsnips and potatoes, courgette and cabbage, and a huge crop of strawberries all set to ripen. Graham’s greenhouse houses a sweet smelling tomato plant and a growing bag of cucumber: this is the first year that he has sown from seed.

Home manager Faz explains: “Part of Graham’s heritage is his enthusiasm for growing and eating food that he grows, it comes from his family. His father is a very, very keen gardener, so I think even though he only lived with his family until the age of 16 before he went into residential school and living, it has obviously featured highly.”

When Faz first met Graham five years ago he was doing gardening in college, but it was only once a week for a two hour session. A shake up in policy enabling people to access further education deemed Graham ‘too old’, so that’s when he said: “I want a garden and I want to do gardening.” They built the raised beds using charitable donations, some help from students and Graham himself moved about ten tonnes of soil.

Graham’s garden led to the transformation of cooking and eating at the home. With an abundance of white cabbage leading to nothing but coleslaw, Francine Russell, food consultant and founder of All About Food, was called in to talk residents and staff through using fresh produce in their weekly menu. She was very keen to teach everyone to build on the relationship between bringing produce in and creating meals together. “We would bring things in but we weren’t very creative, so Francine came in and did a big bit of work around nutrition and growing our own food,” explains Faz.

Cooking seems to have been something Graham has done before, because it was his request at a residents’ meeting that started the home’s focus on food. His father mentioned that he used to help in the kitchen, so it is certainly where he feels at home. The variety of meals is influenced by everyone who lives in the home; there are many different tastes and everyone makes suggestions and tries new ideas.

As Faz explains: “We went through cookbooks and there was quite a diverse range of what people wanted to cook. I think we are all influencing each other. ” Since building the vegetable garden, staff and residents have learnt new skills together, choosing, making and reviewing meals as a community. One fellow resident commented that she feels happier since Graham’s garden was built, and one cooking session with Graham showed the high quality of meals they make.

Here is one of Graham’s favourite recipes, cooked with some of the vegetables he grows:

The original recipe was written by Francine Russell who is a food consultant and founder of Bristol based consultancy All About Food. Graham has adapted it to the vegetables he grows – the recipe can be altered according to the fresh produce you have at the time, and can be a base for any healthier dish due to the “hidden vegetables”. As well as a Mediterranean pasta sauce this can be a base for soups or stews, and can be made well in advance and frozen.

A large pinch of oregano